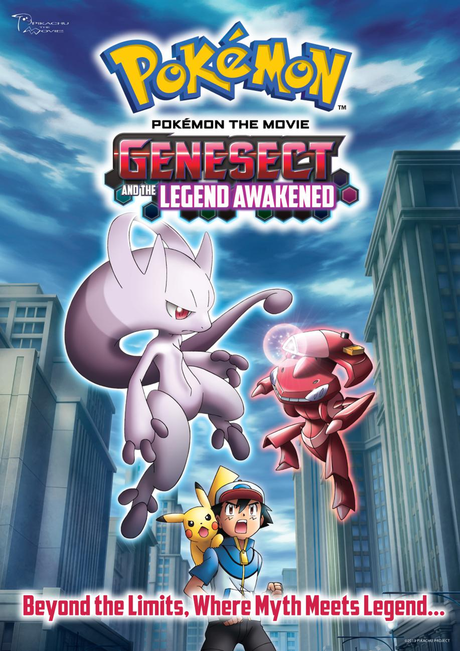 It’s best to go into these things with no expectations if possible. If you form an opinion before you even see the damn movie, the end result is bound to be biased, which isn’t good for anyone involved. But with a film that’s racked up a reputation like Genesect: The Legend Awakened’s, it’s a feat that’s much easier said than done.

That’s right- a Pokemon movie released after 2005 with a reputation. Clearly a momentous occasion.

Keep in mind that at the time of this movie’s release, the Internet was going wild over the reveal of a new Mewtwo form, with rumors ranging from evolutions to the fabled “Mewthree” of the late 90s.

I mean, in retrospect the whole Mega Evolution concept was kinda obvious, but we were all just happy to be swept on the Generation VI hype train. And what better way to capitalize on that than, well, capitalizing on it? This film actually got a ton of promotion, from its usage of Genesect (an event Pokemon released with Black & White 2 less than a year prior) to a buildup in the main show- something we hadn’t seen since the first movie.

And we all loved how that ended up, right?

We open out in the mountains, where a group of wild Pokemon are exploring with the help of a distinctly feminine Mewtwo (Miriam Pultro).

Needless to say, this is the most infamous aspect of the movie. The introduction of a second Mewtwo goes against the history expanded upon in the games and show alike, where the original was created by scientists in an attempt to clone the legendary Pokemon Mew (as we saw quite some time ago). Needless to say, another organization attempting the same experiment and achieving the exact same result is not only kind of dumb on their part, but downright statistically improbable. Either coincidences are ridiculously common in the Pokemon universe, or the original Mewtwo is trans (which would admittedly be some pretty badass representation).

The fact that she has a habit of Mega Evolving with no outside influence only opens up another can of worms.

Regardless, I’m willing to give her the benefit of the doubt. Even putting logic and established game mechanics aside, I’d be perfectly alright with the addition of another Mewtwo if she was a complex and interesting character.

She’s not. I’ll get into that later.

As she decides to test the altitude limits of her Mega Y form, a group of Genesect (once again there’s only supposed to be one in existence, but Mewtwo alone brings enough logical faults to this movie) travel to the area that their Shiny leader (Scottie Ray) believes to be their home. Getting home is sort of a big deal for them, as the youngest member of the group (Samia Mounts) continually stresses in the form of whining. I hope you enjoy this endearing character trait because that’s all you’re gonna get from this kid.

Even nature itself is trying to shut these guys up, as an avalanche threatens them almost immediately before Mewtwo intervenes. A flashback sequence reveals that the Genesect are ancient beasts that were artificially revived by scientists, and she’s the one who has to break it to them that their home is gone and it sucks to suck. Obviously they don’t take this well, and attack Mewtwo before heading off to a nearby city that they think is their old home.

The primary action takes place in New Tork City, a name that couldn’t be more obvious if it was “goblin” spelled backwards. Our friends are attending the opening of a nature reserve that’s located right in the middle of Central Park, led by tour guide Eric (Jake Paque) who is objectively the worst.

Nature is boring though, so Ash and Pikachu separate from the group in search of a plot development. This is where they meet the child Genesect, who’s sitting around moping because, you know, it wants to go home. After some shenanigans involving literally surfing on this incredibly powerful creature, the social link is created and the bonds of friendship will compel Ash to help this thing achieve its goal.

It’s at this point that the leader shows up, immediately interprets the situation as Stranger Danger, and reacts violently. The kid objects because this means that it can finally have lines without the word “home” in them, but the leader exhibits some form of mind control and forces it to attack. Before the series can come to an early end, however, Mewtwo shows up and takes the leads to an underground tunnel. Although everyone is thankful, their savior claims that she couldn’t care less about them and was simply trying to protect their Pokemon.

This is where the problem with the new Mewtwo comes in. She’s exactly the same as the previous one, minus the character development. In fact, if anything any attempts at character development feel rushed because she isn’t the primary focus of the film. She’s the made-for-TV edit of the Dan Green character.

Furthermore, I don’t hate Mewtwo’s voice actor- if anything I respect her for taking a role that’s clearly out of her comfort zone and accepting the backlash with dignity- but that doesn’t mean that she does a good job. All of her lines are delivered with the same intensity as someone who discovered that her sandwich was slightly over-toasted.

Mewtwo insists that everyone forget about her, but recalls the story of the Genesects origins (which we already know). Omnicidal beasts running around aren’t high on the leads’ list of priorities, however, as they spend the rest of the day hanging out at the cafe and talking about flowers. This allows the Genesect to up and take over the greenhouse in the center of the park, forcing everyone else out because they’re filthy xenophobes.

Even though they’re no match for the myths, the local Pokemon don’t take this sitting down and become the first ones in this film to show some goddamn initiative. Hell, one particular Feraligatr accomplishes more in this scene than our supposed protagonists do in the entire movie.

Team Rocket also makes its obligatory appearance here when they try to capture the Paleozoic Pokemon with a bazooka. Yeah, I don’t know either.

While all this is going down, Mewtwo’s brooding over on a nearby bridge, presumably because she couldn’t get tickets to Hamilton or something. Some of the local wildlife informs her that some major stuff is about to go down, and she expresses concern for the residents of the city and heads over. There’s no reason provided for why she suddenly cares about the human populace other than poor writing, so maybe she’s just aware that high crime rates would lower the property value or something.

The human characters manage to get in through a service entrance, where whatever the hell the Genesect are doing threatens what is apparently the only power grid in the city. I don’t know why the only source of electricity is located under some random greenhouse in a natural park, but they needed to raise the stakes somehow.

As it turns out, the Genesect have commandeered the building in order to build a cocoon. It looks bad. I mean really, really, early 00s CGI bad.

The kid is happy to see them again, and the native Pokemon begin to try to take back their home, this time with the help of Mewtwo.

The rest of the film is devoted to the fight that ensues, and trust me when I say that it’s way more boring than it sounds. It all follows a certain pattern: Mewtwo Mega Evolves, the young Genesect protests, the Red Genesect uses mind control, the Genesect pull off some Super Sentai shit, Mewtwo uses bullet time to evade, the audience begs for release. Sometimes the kid will pull off a heroic sacrifice (I’m serious, this happens like three times). Eventually the carnage reaches the generators and blacks out the whole city, somehow avoiding collateral damage despite the fact that it should have taken out large portions of the Northeast.

This turns out to be the final straw for Mewtwo, who claims that it’s time to “go beyond the limit” and takes the Genesect leader on an impromptu flight, presumably for the world’s most extreme time-out. Ultimately, “breaking the limit” means “flying into friggin’ space” and the two parties wake up beyond the planet’s atmosphere. Always one to make the best out of a bad situation, Mewtwo uses this opportunity to show Genesect the wonders of the world and manages to bring it to her side through the power of friendship.

This is not a joke. I wish it was a joke, but unfortunately that would require some level of irony and this is all played completely straight. In the interest of posterity, here is the actual dialogue from this scene:

MEWTWO
Yes. This is the planet we both come from. The planet on which you and I were created. Created because there is a reason for us to be here. The inhabitants of this planet- people and Pokemon alike- live together as friends. Here, we are all friends. You and I are friends.

For those of you keeping score at home, this is approximately the eleventh movie to have a villain that falls in the “not evil, just misunderstood” category, not to mention the third in a row. Going into this series it’s practically a given that things will turn out kinda same-y, but there’s a certain point where things stop becoming a routine and just feel uninspired. The story was barely meandering along to begin with, but this revelation just stops it dead in its tracks.

After heading back to the city (sadly, neither of them burn up while reentering the atmosphere, although they do need some help with the landing), all involved try to determine where the Genesect can live because clearly the rent in the natural park is way too high for them. Fortunately, Ash remembers that the plant life that the living fossils recognized was transplanted from a nearby nature reserve, all is well, and the two parties part ways, swearing to have no particular feelings towards each other one way or the other.

It goes without saying that Genesect: The Legend Awakened is not a good movie. I spent a good portion of it sorely tempted to lie on the floor and stare at the carpet and I’m pretty sure it would have been just as entertaining. None of the characters introduced approach anything remotely resembling interesting, the voice acting is the worst it’s been since the TAJ Productions debacle, and ultimately the final product is so unremarkable that I’m not 100% sure I didn’t make it up.

Regardless, it’s not really worth the time and energy to go into a frenzy over how terrible it is. The aspects that everyone loves to rant about are only a small piece in the puzzle that is The Legend Awakened’s quality. Hell, the introduction of another Mewtwo could have been good. If it was handled correctly it could have been the film’s strongest point. And even if they failed, there’s no need to decry the work just because of a single concept.

But naturally this wasn’t the popular reaction. There’s a reason a good portion of this review is talking about this character- the fans went ballistic. The writer was ridiculed to the point of temporarily closing down his Twitter account, the Japanese actress was torn apart for the suggestion that this was only done for the kiddies, and the director (whose idea it actually was to include this character in the first place) continues to head the movies to this day.

The moral of the story is that if you’re in charge you can do whatever the hell you want, apparently.