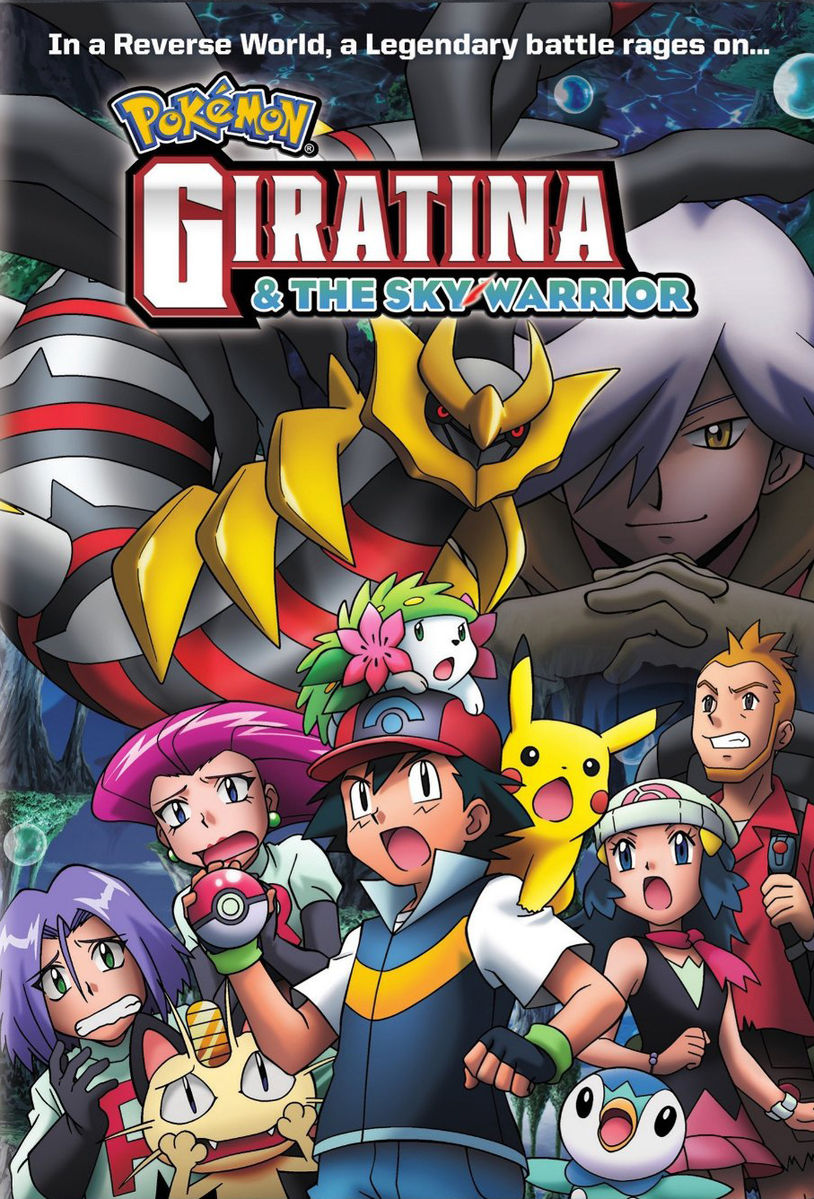 It’s difficult to imagine in today’s society, but one of the biggest hype points of the fourth series of games (in addition to the Nintendo DS in general) was the addition of an Internet connection. Games no longer needed to be sent out fully completed, and customers could receive additional content later, usually in the form of new Pokemon.

Technically speaking, event Pokemon have been around since the start (most notably Mew), but now you could get them straight from the source instead of from a bored Wal Mart employee with a cable. At the same time, this wasn’t like today where developers could send out a patch with new data, instead the relevant information was hidden and subsequently unlocked through the usage of event-flag triggering items sent out over Wi-Fi, usually one of the eighteen or so legendaries that seemed to spring up in this generation.

This movie was actually meant to be the grand debut of one of these new Pokemon, but hackers managed to pull the data from the game before the event could actually happen.

So Giratina and the Sky Warrior, originally envisioned as an announcement of sorts for Pokemon Platinum, doesn’t really offer too much that can be considered new. Regardless, it’s still there amongst the series canon, so let’s dive in and hope that it isn’t too painful.

We open on a small hedgehog-like Pokemon walking through the woods, as this is supposed to interest us. She’ll be important later.

While she stops at a lake in the woods, she’s astonished to find Dialga there, still recuperating from the battle it had in the last film. As it tries to take a drink, both legendaries are pulled into a portal by the Renegade Pokemon Giratina. A collection of unintroduced characters watch on as the two behemoths duke it out with the hedgehog along for the ride.

After a while, the smaller Pokemon is able to escape through a hidden power and goes flying. Dialga realizes that its quota for this movie is up, and escapes by trapping Giratina in a time loop until the portal closes. Disappointed that this particular time warp does not involve Richard O’Brien, the hellbeast roars in frustration and we join our leads.

As Ash, Dawn, and Brock prepare for a nice meal and show off their current teams, they’re interrupted by the pokemon from the prologue, who wastes no time in stealing all of their food. Immediately upon confrontation, the Pokemon reveals that she can speak through telepathy, introduces herself as Shaymin (Amy Palant), and says that she needs to get to the Gracedia fields immediately or so help her god.

Shaymin is, to be perfectly blunt, the worst. She spends the entire movie either complaining or demanding, and I don’t like characters that remind me of myself.

I will admit to having a weakness for characters who are terrible people, but the key to making such a character work is having something underneath the surface, such as a traumatic childhood or the potential to kill hundreds of people on a whim. But with Shaymin what you see is what you get. There’s no ulterior motive or backstory or anything, just someone whining about getting to the flower fields like they’re her goddamn Maths A-Level. And we’re supposed to like her just because she’s cute and can grow flowers.

This isn’t a joke.

She’s brought to the local Pokemon Center and through a bit of exposition we learn that this habit is actually Seed Flare, which purifies objects and could probably single-handedly solve the pollution crisis if Shaymin wasn’t so terrible.

Despite the new Pokemon’s inability to get along with Ash, the heroes decide to help Shaymin on its journey instead of being reasonable and kicking her like a football to see how far she goes. They begin by walking through what appears to be a showcase of art students’ sculptures when Team Rocket makes their obligatory appearance and steals Shaymin just because they can. Before they can get very far, however, a portal is opened up in one of the statues and everyone except Brock is sucked into the area from the prologue.

Poor Brock. I mean, I’m tired of what his character has become, but the guy hasn’t had anything to do in like seven movies.

Anyway, Giratina and the Sky Warrior suffers from the same issues with visuals that plague the rest of the series, but the Reverse World is certainly the high point. While a good portion of the film suffers from stilted art direction and obvious usage of CGI; this area is dark, brooding, and otherworldly in the best possible way. It’s like if Lucio Fulci directed the Exploding Plastic Inevitable.

And with the Reverse World comes its resident hellbeast. Shaymin is convinced that Giratina is going to eat her, and to be honest they should let him do that. Demonic monstrosities need to eat too, and she already comes with her own garnish.

It’s around this point that we’re officially introduced to our supporting characters. Newton Graceland (Marc Thompson) is a ridiculous scientist with a Doctor Octopus backpack who has been living by himself Man vs. Wild style in Hell for the last five years. His enemy is his former colleague and protege Zero (Parker Anderson).

You can tell that Zero’s the villain because he has a bad Yu-Gi-Oh haircut and a terrible variation of the Kill Bill jumpsuit. Aided by his computer program Infi (Bella Hudson), Zero seeks to preserve the Reverse World by any means possible.

See, the two worlds (because this movie operates on a very basic version of the multiverse theory) exist in a state of symbiosis. So that the “real world” can continue existing in its natural state, things are screwed up in the Reverse World, sort of like New Jersey. The battle between Dialga and Palkia in the previous film apparently did some serious damage to spacetime, and now Giratina’s out for revenge against the two, explaining the showdown at the beginning of the film.

After playing some keep-away with Giratina, Newton leads the group to the exit (it isn’t clearly marked, which has to be breaking fire code), with the sage advice to stay away from mirrors.

Even though it’s quickly established that in this case a mirror can be defined as “literally any reflective surface”, our heroes decide to get to their destination by taking a train where they’re surrounded by windows. It doesn’t even have a murder or a penguin detective, so it’s pretty lame by train standards.

What it does have is a bunch of people with Gracedia flowers who can explain their connection with Shaymin. This particular breed is known for causing the species to transform, which would be remarkable if it wasn’t for the fact that rapid-fire evolution is somewhat common in this universe. Demonstrating, we’re able to see Shaymin change from Land Forme to Sky Forme, granting it the ability to fly despite having no evident means of lift or propulsion.

This shift in form also leads to a complete personality change, going from soft-spoken, haughty, and obnoxious to confident, brash, and obnoxious. In the Japanese version it even switches from female to male pronouns, so I guess this means that we’ve got our first genderfluid character. It’s a shame that they’re terrible.

However, this sort of plot development comes with a price, and the train is soon attacked by Zero’s Magnemite and Magneton. This only provides an opportunity for Shaymin to show off his new abilities, however, and the issue is swiftly dealt with.

We next see the group playing around on a boat.

Unfortunately, water used for cast bonding is still a reflective surface and the entire party is quickly pulled back into the Reverse World, with Zero following close behind. Trapping everyone with his Magnemite, he’s able to use the terrible state of the universe to force Shaymin (having gone back to normal due to the change of environment) to let off a Seed Flare and reopen the portal, allowing Giratina to escape, shifting forms along the way.

It’s not able to get very far, however, as Zero immediately traps it in a machine to attempt to steal its power. You’d think that someone so single-mindedly intent on preserving a certain area would be against destroying its god, but who am I to judge.

That said, it doesn’t take long before Ash is able to overpower Zero and Newton disables the machine by pulling a Two Idiots One Keyboard with his (still unexplained) robot backpack, but in the spirit of dramatic convenience Giratina’s energy has been 99% drained so for all intents and purposes it’s still mostly dead. Finally feeling some form of guilt, Shaymin uses Aromatherapy on it, which apparently works like CPR except you don’t need to remember the beat to Stayin’ Alive.

Giratina is thus revived, and Zero escapes into the Reverse World with Ash, Giratina, and Shaymin in pursuit and starts breaking things, causing a glacier in the real world to crack. This puts one of the nearby towns in danger, in a similar manner to a real-life town in Norway which is incredibly terrifying. Why would anyone want to live in Norway.

This leads to a series of scenes where a number of local Pokemon, including the legendary Pokemon Regigigas (Tomomichi Nishimura) for some reason, attempt to slow down the flow of ice with… even more ice. I’ve heard of fighting fire with fire, but this is ridiculous.

Bad jokes aside, Zero’s attempts at poisoning Ash don’t go as expected thanks to Shaymin’s status as a living air purifier, and Giratina manages to force his ship back into the real world where it’s frozen in the ice.

Fortunately, any attempt at padding out this movie further is inhibited by the fact that this whole time we’ve been fighting in the same field that Shaymin was trying to get to in the first place, signified by a group of Shaymin using the flowers to shift into their Sky Forme. We get an attempt at a heartfelt goodbye despite the fact that nobody really seems to be into it, and the Shaymin all fly off to deliver toys to the good children of the world or whatever.

I’m fairly torn on this movie. There have been films in this series that I have outright hated, and this surely isn’t one of them. But at the same time, it’s clearly not a good movie. It’s downright bad, in fact. There’s no reason for it to be attached to the previous film, the plot is lacking, the visuals are disappointing more often than not, and worst of all there’s not a single likeable one-off character. Sure, the movie has its good points, but those begin and end with the design of the Reverse World.

Ultimately, I can safely say that the poster for Giratina and the Sky Warrior is more enjoyable than the actual movie. As with the previous movie I don’t want to give a real sense of final judgement until we wrap up the trilogy, but as a stand-alone there’s nothing to be missed by skipping out on this one altogether.