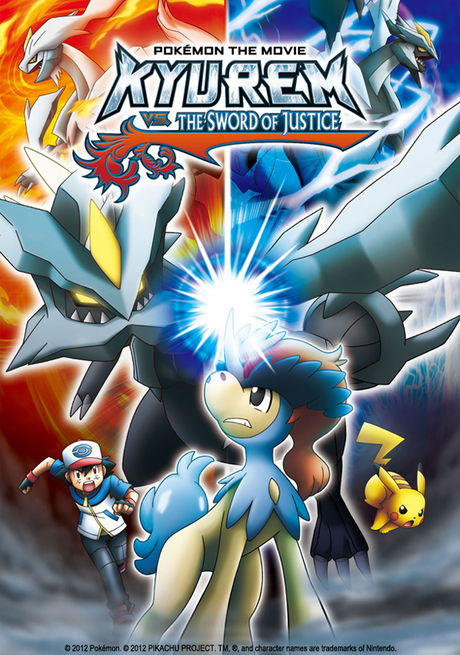 Franchises in Film Paper 15: Kyruem vs. The Sword of Justice

Looking over the first fifteen years of films released as part of the Pokémon franchise, it’s fairly obvious that there’s a formula present. Despite the varied reception by the series’ fans, each individual movie had proved itself to be a hit at the box office and consistently topped the charts for animated films since 2003. However, by the point the series had gotten flak for being repetitive and predictable, with relatively few attempts to break the mold.

Although the main animated series had regained a number of fans due to the improvement in animation quality and tighter storytelling, resemblance between the planned imagery and the aftermath of the 2011 Tohoku earthquake forced the company to scrap the storyline that they were working on and present a season’s worth of filler in its place. Needless to say, this did not make them popular with their fanbase, and the company was essentially scrambling to reform its public image.

By examining the resulting film, it can be determined that the creative process behind the average Pokémon film at the time was to simply connect the dots and include what was determined to be popular in previous films. Through the combination of a young action hero (recently made available to the public), a mysterious villain, and little emphasis on the human characters, the finished product is an attempt to create an “instant blockbuster” without any particular experimentation or risks.

The film introduces itself through the exploits of the Swords of Justice, a clear Three Musketeers reference and friends to all- nevermind the fact that they were downright xenophobic in the games. The partnership consists of Terrakion (Henry Carr), the rough and tumble brute with a heart of gold, Viridian (Emily Williams), the wise and feminine strategist, and Cobalion (H.D. Quinn), who is present. Although the group is meant to evoke comparisons to action heroes, their association with a child character and chant regarding friendship cause them to appear closer to children on a schoolyard that nobody else wants to hang out with. The young Keldeo (Vic Mignogna) desperately wants to join their club, but can’t, presumably because its victorious smirk isn’t up to par.

Officially, Keldeo is barred membership because it is unable to “summon its sword”, a phrase that opens itself to a number of phallic observations and immature barbs. Demonstrating the typical amount of self-preservation skills for a shonen hero, the young trainee decides that defending oneself isn’t too important a quality in a warrior and intends to prove itself by facing off against the local menace Kyurem (Marc Thompson).

While the crimes that Kyurem is guilty of are never actually outlined in the film, its primary concern appears to be excessive showmanship, as the runt’s entrance only prompts a grand spiel about “stepping through the gate in order to face the challenge”. The resulting brawl causes the larger Pokemon to shatter Keldeo’s horn (once again leading to a number of jokes about how “its actions are clearly meant to be compensating for something”), and allowing it to realize the folly of its actions. By this point, the other Swords of Justice have shown up, but the dragon freezes them in crystal to keep them from interfering, practically a guarantee that they’ll survive the film with zero consequences. This frightens Keldeo to the point of turning its back on its most trusted allies, stumbling down the hill as Kyurem swears that the fight will be seen to its end.

It is only here, approximately a quarter of the way into the movie, that we meet our alleged “protagonists,” who are taking a train ride to their next destination. While the theme music plays, the more “cutesy” team members run around the train while coming across children who are overly surprised and excited to see them given that Pikachu alone is one of the major aspects of their society. This introduction, combined with the large ordeal that erupts out of the party buying lunch boxes, provides exactly the right amount of insight for how exciting this movie is going to be.

As the train pulls out of the station, Keldeo (who has apparently been falling for several hours by this point) lands on one of the rear cars, with Kyurem still chasing it. The party, having noticed this, immediately goes to help, and demonstrates their world-weariness by not being surprised that:

The group (and, by extension, the train) are only saved from Kyurem’s wrath by the vehicle’s entrance into a tunnel, keeping the Legendary from a fate taken straight from a Golden Age of Animation cartoon.

Iris is familiar with the ice dragon due to her upbringing, which appears to have consisted of sitting around listening to stories from the village elder. While the games’ history proclaims that Kyurem was the shell of a “legendary dragon” that split apart to become Reshiram and Zekrom; the film simply states that they have a similar background. Furthermore, the alternate forms that Kyurem is able to take in the main series are achieved by genetically splicing it with one of its brethren, whereas here it is able to shift form at will.

It’s only when the leads arrive in town that the audience is allowed to understand the motivations and history of these characters and all the inconsistencies with canon that lie within. Keldeo is also able to explain the chase its currently in, complete with a recap of the last thirty minutes of the movie, in a manner that has been described as “very Vic Mignoga”. This tale encourages Ash to join the horse on its quest, as they are essentially the exact same character.

As the party sets out to the Legendary’s dwelling place, however, Kyurem approaches the city, freezing it like a particularly obnoxious Roland Emmerich movie. This results in the start of the chase scene that makes up the latter half of the film, padding out the plot in an attempt to save off any potential resolution of conflict. Eventually the group ends up in a museum dedicated to (somehow still functional) transportation, allowing them to split up in an attempt to divert the monster’s attention.

Iris and Cilan are sent to their potential doom by acting as bait, leaving Ash and Keldeo free for whatever character development the writers could squeeze into the remaining runtime of the film. Particular focus is given to Keldeo’s memories of training with the trio, learning valuable advice that would have meant more to the audience if it had been presented beforehand, even in the form of a montage or something similar. As it is, it only appears to give Keldeo some form of motivation to hang onto when it’s inevitably put into trouble in ten minutes, terrible as it is.

Eventually, the pair arrive at the lair of Kyurem, allowing the beast to unleash its inner diva once more through unnecessary presentation. Although the human characters are able to free the Swords of Justice from their prison (and are recognized by name, although this is not explained), Keldeo is stated to be on its own for the actual fight. What follows is not so much a Pokemon battle as it is a standard kung-fu action sequence with Pokemon aspects occasionally thrown in, leading to a somewhat unimpressive (if fitting) denouement.

However, Keldeo’s lack of preparation catches up to it and it’s soon paralyzed with fear again, before remembering the words of its partners that had only just been revealed to the audience. This gives the warrior the necessary courage that it needs to summon an alternate form that somehow looks even more pompous than its usual appearance, fixing its horn and putting it back in the fray (this is treated as miracle, despite evolution and rapid healing both being the norm for this universe). Furthermore, the “Resolute Forme” gives the Pokemon the experience it needs to “summon its sword”, putting it on apparent equal ground with the behemoth.

Despite this, although the sudden change in appearance allows it to stall for time, it does not mean that its abilities have particularly improved, and it is eventually overpowered. As Kyurem stands over its opponent and everyone prepares for the inevitable death sequence (and, naturally, the inevitable revival scene), the larger Pokemon suddenly acquiesces.

In an attempt to create a plot twist, it has been determined that Kyurem bears no ill will towards its challenger and has been impressed by its mettle. The protagonists are allowed to leave without any hassle as Keldeo is made an official Sword of Justice, and the film comes to a disappointing conclusion as everyone parts ways.

Upon initial observation, it is clear that Kyurem vs. The Sword of Justice brings nothing new to the table. The writing, while passable, is not spectacular, and merely appears to be a retread of the themes and concepts introduced in previous films. None of the characters have any particular staying power, and the reveal of Kyurem to be “not so bad” invalidates the struggles of the rest of the film and can easily be seen as a “cop-out”. The visuals (despite maintaining a consistent quality throughout) are similarly lacking, with the primary town being inspired by Tokyo; a rather tame locale compared to the more foreign locations alluded to in the film’s predecessors.

Even if this choice was selected simply due to a small travel budget, it manages to bring the film into a level of blandness where it can be called into question if the producers were even trying. Although the film doesn’t cross the threshold into being a “bad” movie, that does not mean that it is entertaining either. Its derivative plot and forgettable aspects make it easy to overlook, both within the grand scope of the series and as a movie in general. Ultimately, Kyurem vs. The Sword of Justice may as well be nonexistent.