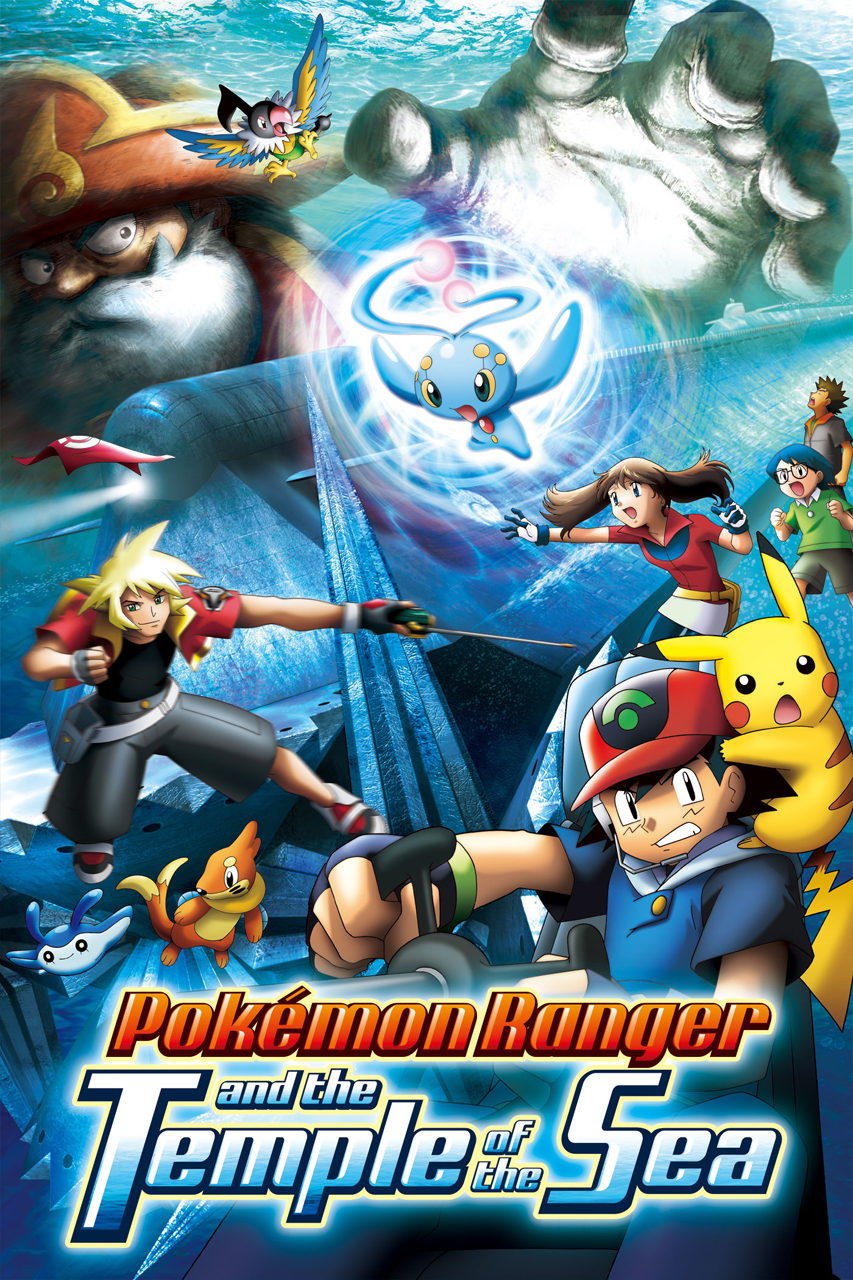 There are three things to keep in mind before I go into the details of this movie:

You got all that? Good.

We open on a miscolored avocado that we’re told is an egg floating through the sea before being loaded onto an enemy submarine. Our antagonist for this evening is the Phantom (Eric Schussler). He’s the leader of what appears to be a modern-day pirate band, so, you know, good for him. It is, it is a glorious thing, to be a pirate king. As he examines the as-of-yet unexplained bounty, however, one of his minions double crosses him and steals it.

The double-crosser is revealed to be Pokemon Ranger Jack Walker (Rich McNanna). He’s Jackie to his friends, but I can assure you that we are not friends. Unfortunately, we’re going to be dealing with him for the rest of the movie. Jack mostly exists to be told how great he is by the other characters. He’s meant to be this great paragon of virtue and skill, but we never actually get to see any of it. The closest thing we get is a series of Bond one-liners that are terrible even by the dubious standards those are judged by as he escapes with the egg.

Shortly after this, our protagonists are seen walking through through the desert and nearly dying of dehydration before coming across a group of water specialists. The primary character that we’re concerned with in this family is Lizabeth (Emily Williams) (although there’s not really much substance to her), but I would like to take a moment to point out that the grandfather’s name is Ship (Simcha Whitehill). Who the hell would name their child that. I understand that this whole movie’s got this whole love affair with the sea going on, but that’s taking things to Subway commercial levels.

They run a circus that utilizes psychic and water types to perform swimming routines in outdoor circuits, which we then get to see a performance of in a nearby port town. It’s nothing spectacular, but at least it’s innovative.

While the Gazillion Bubble Show is going on, the family’s Buizel (Daisuke Sakaguchi), playing the role of the marketable preview character, shows the gang that the trailer has the egg for some reason, but this is quickly pushed aside. That night, May has a dream involving swimming amongst water Pokemon towards an underwater city, in a way that I’m sure is not meant to be prophetic at all.

As everyone is out eating the next day, Team Rocket, having followed the heroes, attempts to steal the egg. Once they examine their bounty, however, the egg glows and they find that their bodies (and, apparently, their larynxes) are switched. The resulting scenes are probably the best part of the movie. While the premise plays out like a terrible webcomic from the early 2000s, the screenwriters are clearly having fun with it.

The resulting confusion allows Jack, who was hanging out with the family disguised as a clown, to get the egg back. This reveal allows Ash to fawn over him for the rest of the movie, because now he wants to be a Pokemon Ranger and you can too for thirty dollars at your local Gamestop.

The resulting exposition allows Phantom and his crew to catch up with the protagonists, and the chase is on once again to keep the egg. The commotion eventually causes the egg to go flying out of its container, and May is the one to catch it. Keep in mind that this is the first thing of substance that she has done in four movies.

As the grand prize for making such an impressive catch, May gets a new Pokemon in the form of the mythical Manaphy (Michele Knotz). Manaphy itself is unremarkable aside from the fact that it has a shrill, demanding voice which makes it pretty hard to ignore.

The relationship between May and Manaphy, however, is actually a bit of a relief in that it’s nothing like any of the other relationships we’ve seen with Pokemon in any of these movies. Instead, they go with an approach that’s closer to that of a mother and child, although I don’t know how accurate the concept of imprinting is in this situation and I don’t think it’s really demonstrated in any other instance in the series.

Back on track, the antagonists are lost and we finally get some explanation regarding what’s going on in this film. As it turns out, the performing family is comprised of the last remaining descendants of a race of ancient sea-dwelling people (of the Atlantis variety, not the Zora one). Their homeland, sunk during a war, is set to be revealed to the world again with the coming of the Prince of the Sea, Manaphy. Technically speaking, its name is the Temple of Samiya but in the interest of making this review seem longer I’ll just stick with the of the Sea title.

We get yet another road trip movie out of this ordeal as Manaphy is supposed to lead the way, only this time it’s on the ocean so I guess it’s technically a strait trip or whatever. Jack and the family try to leave Ash and friends behind, but by this point Manaphy has bonded so closely with May that it refuses to go without them.

The majority of the time is spent praising Jack and watching the developing bond between May and Manaphy, who eventually learns to speak. There’s also a lot of time spent showing the legendary swimming around and playing with assorted Pokemon. The “real-life” elements are based on a number of Italian port cities, but the underwater scenery is so beautiful that I honestly thought that it was inspired by Hawaii for a few minutes.

In the middle of one of the many, many Jack Walker praise hours we get some actual backstory on the character. While hiking in the mountains one day as a child he got caught in a blizzard, and the local Pokemon saved him from a certain death rather than doing the sensible thing and killing him before using his body for sustenance.

Naturally, this inspired him to become a Ranger and he’s allowed to tell everybody else what to do. As he is concerned with how attached Manaphy is getting to its mother figure, he suggests that May spend some time apart from the child, which would be heartbreaking if we didn’t already see this with Jirachi in the movies and Togepi in the main show.

Finally, after some additional angst, Manaphy leads them to the Temple of the Sea, here played by the Guggenheim Museum.

Given that it’s still underwater, the protagonists and Lizabeth use a submarine to investigate, followed later by Jack in a separate vessel.

The interior, looking like it’s composed of rejected designs from Monument Valley, seems to be responding especially to Manaphy, as it descends further into the temple. Meanwhile, Phantom manages to make it to the undersea structure and intercept them, forcing his way into the temple’s treasure room.

The primary purpose of this portion is to house the Phantom’s final goal- the Sea Crown. Contrary to its name, this is not an actual crown but rather more of a pincushion comprised of stone and crystal. The pirate captain attempts to take it, but it’s apparently a load-bearing structure, as the entire palace begins to flood while he’s chased away by Jack. The Ranger then leaves, thus cementing his status as a Useless Character™.

The crystals are scattered, but just about everyone besides Ash, May, and their respective Pokemon manage to escape. Because, you know, god forbid anyone else help during the climax, Ash places May, Pikachu, and Manaphy in a nearby escape pod. This is despite the fact that Manaphy has been breathing underwater this entire movie. Although he manages to get most of the crystals to their rightful place, the incoming water proves to be too much for him and he seemingly drowns as the others worry.

But have no fear. Either Manaphy’s power (which we’ve only seen used for body-swapping shenanigans) involves reviving the dead or we’re operating on Earthbound rules, because May’s prayers are able to revive him and he is able to finish reconstructing the structure. The temple is raised to the surface, but Phantom has been hiding nearby and snatches Manaphy.

As he speeds away with the legendary, Ash emerges in a Super Saiyan-esque beam of light and take the prince back. In retaliation, the pirates use a scrambler of some kind to confuse all of the nearby wildlife, but Manaphy is able to break through the din and lead the assorted water Pokemon to battle.

Kyogre, the legendary god of the sea, is there too for some reason. It doesn’t even do anything, it’s just there like it’s doing a brief walk-on role for a quick paycheck. It’s the epitome of wasted potential, and I really wish they had done more with it. Now that I think about, just remake this movie but switch the roles of Manaphy and Kyogre. I want to see May form a lasting bond with a leviathan, and I want it now, dammit.

Wrapping up, the Pokemon attack the sub, the Phantom is crushed under some debris, everyone gets their own personal energy beam, May and Manaphy say goodbye for good, and then finally this goddamn movie ends and we can put it back on the shelf.

I don’t have too much to say about Pokemon Ranger and the Temple of the Sea, which is fitting because it doesn’t have too much to offer. Sure, the scenery is nice and it’s far from the worst film in the series, but there’s no real substance to it and just about everything about the voice acting feels stilted and awkward, with Team Rocket being pretty much the only characters sounding comfortable in their performance.

But the biggest issue with this movie is probably that it’s just so forgettable. I waited a few days before writing the bulk of this review and nothing is sticking out in my memory. Just about every individual aspect was taken from the Jirachi film, and even then this one only gets a pass because it looks better and has a less annoying legendary.

Speaking of which, I would like to bring up an important point about the state of this movie’s supporting characters. Despite the brevity of the series’ films as a whole, a lot of the better ones still managed to fit in some form of character development. Molly and Latias both learn to move on from loss, and Tory learned to get over his deepest fears. But here the supporting roles are just sort of stagnant. Unlikable characters can be acceptable provided that they undergo some form of change (Song of the Sea is probably the best contemporary example of this), but when they’re just sort of there it can get a little grating.

I think that we can safely say that we’ve entered the “shovelware” era of the film franchise, where each individual entry is more concerned with making a quick buck than providing entertainment value. Not that there’s anything wrong with that, you can still get some form of enjoyment out of this type of entertainment even if it’s not the kind that was originally intended, but it does make the entire process a little slower. And judging from what I know about the next couple seasons of the show, it’s not that far off.