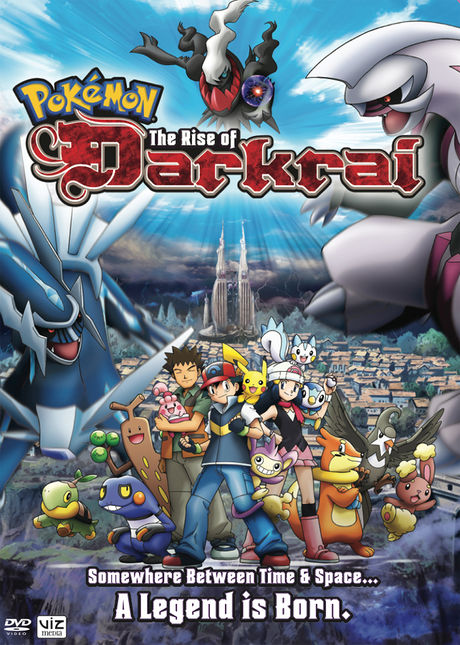 After four years of teasing, by 2007 the fourth generation of Pokemon games were finally out, ready to disappoint millions of fans. And with this new series of games came another dramatic upheaval of the show’s dynamic.

In order to better represent the new batch of games, the leads got a reset on their Pokemon teams, and the character roster was updated to represent the new leads. May and Max were (finally) removed, and in their place we got the character Dawn (Emily Jenness). From what I can gather, she’s pretty much just a nicer May but I’m willing to give her more of a break because she didn’t come with an annoying sibling.

Congratulations, Pokemon. You actually made a
decent coordinator character.

Sinnoh also brought a forced mascot in the form of Dawn’s Piplup (Michele Knotz). It doesn’t really do anything besides act cute, but it’s constantly out and about and receives too much attention so I feel that it bears mentioning.

I don’t know why Brock is still here. He has a nice new outfit but literally all he does is pine after girls and get rejected. How the mighty have fallen.

Although this era of the anime is generally written off by fans, there’s actually a lot of intent to make a more involved plot. Aspects from this film later show up in the series proper, and we even get a continuing storyline in the next few movies.

But more on that in the coming reviews. Let’s focus on today’s film: The Rise of Darkrai (featuring Dante from the Devil May Cry series).

After an admittedly awesome opening referencing all of the past movies, we’re immediately treated to our main conflict. As a scientist researches disturbances in time and space thanks to a wave of energy hitting the area, Dialga and Palkia, the gods of those two aspects, are shown to be fighting for no reason besides the fact that they can.

To be honest, I’m going back and forth on my opinion of the film’s animation quality. It’s actually rather good where it counts (such as during this opening fight), but you get a lot of shots that are blatant CGI without much of an effort to blend the animation styles.

As Dialga manages to wound Palkia and the two charge at each other, a hourglass breaks and the resulting metaphor is immediately clear.

We then join our heroes as they get hopelessly lost on their way to enter a contest in a nearby city. Alice (Khristine Hvam), a local hot-air balloon enthusiast, is able to bring them to their destination of Alamos Town, based off of Barcelona.

Brock demonstrates how a single joke can evolve into a character’s entire being, another wave of energy hits the town, and Alice offers to show them around town. On the whole, I’d have to say that she’s a fairly likable character, primarily because she doesn’t exist to be great at everything like our last few supporting roles were.

Before we can see the town, however, we need to show off some of the new Pokemon in the region, done through a series of battles with local trainers set to music. They actually skipped ahead and used the opening for the following season, and while it’s not good it’s certainly leagues above the piss-take rap that the show was using at the time.

The first stop on our little tour is a local park, where everyone’s team heads out in preparation for one of those Pikachu shorts. As the Pokemon begin to fight over a stolen berry, Alice does something that’s practically unheard of for a female love interest and showcases a hobby of her own, playing a song on a leaf that manages to calm all of the wildlife down.

With this Chekov’s gun introduced, the leads are informed of some broken columns nearby. As they examine the damage done, someone appears from the shadows, accuses the local nightmare maker Darkrai (Scott Williams) of the deed, and attacks a suspicious figure in the nearby woods.

The attacker is Baron Alberto (Ax Norman), who is so single-mindedly intent on destroying Darkrai that he could probably get a show on the History Channel. His other defining traits involve pining after Alice and demonstrating one of the most phoned-in vocal performances in the entire series.

Naturally, though, Alberto did not actually attack Darkrai but instead managed to injure the scientist from the opening of the film, now introduced as Tonio (Rich McNanna). As a “nerdy” character type, Tonio is required by law to only have one friend, and in this case it’s Alice. I’ll admit, it is kind of nice to see characters with pre-established relationships, even if they’re basic enough that they make Archie seem Pulitzer-worthy in comparison.

Tonio is studying the local disturbances using the journals of the town’s founder Godey (Billy Beach), but before we can reach any plausible conclusion regarding those the actual Darkrai appears from the shadows. Apparently embarrassed at missing his cue, he screams for everyone to get out and attacks Ash with a dark attack. This results in a scene that is vaguely unsettling but ultimately kind of pointless.

Waking up in the hospital, Ash is told that he passed out after being attacked like a wuss. Ash swears revenge on Darkrai for the attack, Team Rocket tags along with Alberto masquerading as a camera crew because I swear they’re turned on by the legend’s abilities and Alice and Tonio maintain that Darkrai’s not really evil, just misunderstood. I think you can guess who’s right.

You see, Tonio’s research has revealed a connection between the legendary and Alice’s identical grandmother Alicia (Kayzie Rogers), who discovered it in Godey’s garden and consequently befriended it. You’d think that they would have told someone about this, but we need to establish a plot and conflict somehow.

Back in the present, our protagonists head over to the city’s pride and joy, the Space-Time Tower. Tonio runs his experiments from the building, and also maintains the tower’s bell system because Quasimoto joined the union and if you’re gonna be a social outcast you may as well go all the way. Apparently just about anyone can utilize this system, given that we proceed to see everyone climb up the tower to change the song being played through a method so unnecessarily complicated it may as well be a Myst puzzle.

As soon as the party reaches the ground again, they’re challenged by the trainers from the opening song again. While we get ready for yet another montage of new Pokemon, Tonio discovers that disruptions in the time-space continuum are erupting again, and a portal opens above the tower. Naturally, everyone’s quick to blame this on Darkrai, and as soon as he shows up he gets ambushed before putting virtually every Pokemon in the area to sleep as the city becomes shrouded in fog and darkness and things start getting weird.

You see, the town has been moved to another dimension that allows Pokemon’s dreams to become visible, which seems like a lesser problem until you remember the parade scene from Paprika. For most of the affected Pokemon this only results in them getting chased (sort of like a furry version of It Follows), but it also has Alberto straight-up turning into his Lickylicky so that’s amusing.

Meanwhile, all of the routes out of the town have been covered by Silent Hill fog, leading anyone that attempts to leave back to the entrance. Again, Alberto is quick to pin the blame on the Pitch-Black Pokemon and rallies the town against it. Tonio finally tells the others about his findings regarding Darkrai, and reveals that it apparently has no concept of the passage of time as it continues to protect Alice under the belief that she is Alicia. Needless to say, if if anyone in this movie had thought to just use his words it would have been resolved a lot sooner.

Through the usage of CSI-level enhancing, it’s determined that the true source of the chaos is the ongoing feud between Dialga and Palkia. The exact reason for the battle between gods is never expanded beyond the fact that Time Man hates Space Man, but I’m told that it gets expanded in the coming movies so we’ll drop it for now. The crossfire is resulting in parts of the town getting literally disintegrated, so needless to say politely asking them to stop isn’t going to work.

Eventually, the dream-like nature of the dimension disappears and everyone wakes up so they can be present for the climax. Darkrai attempts to divert the gods’ attention from the potential collateral damage, while Alice remembers that the song that she played earlier in the film should have a disc in the tower, placed as a failsafe by Godey. Fortunately, the database is well-organized and they’re able to find it with relative ease.

While Ash, Dawn, and Alice attempt to use the hot-air balloon to reach the top of the tower, they end up getting attacked by the beasts and have to be saved by Darkrai. This causes him to get caught in the crossfire, and the legendary dissolves into that stuff that Mr. Game & Watch was made of in Smash Bros. Brawl. Alice is kept from certain death by Tonio, while the other two land on the tower and race up it while hopefully avoiding that creepy kid with the scissors.

While the remaining Pokemon charge up their final attacks, our heroes manage to reach the top and play the song using power generated from their teams, healing Palkia and causing Dialga to leave in frustration. After some pleading from Alice, Palkia realizes that destroying an entire town would generally be perceived as rude and restores the status quo. The town is brought back to normal, and everyone mourns the loss of their new friend.

But not exactly. It turns out that Darkrai, who we saw getting killed in explicit detail and have been told in no uncertain terms that he is not coming back, in fact survived this entire ordeal and is standing on the top of the tower like he’s in an NES tribute while sporting a pair of legs that would make Bayonetta jealous. This is probably the cheapest cop-out in the series thus far, and yet we can all see it coming from a mile away.

Over the credits, we get to see Dawn participate (and consequently lose) the contest in the style of the Daria closing and a terrible punk rock song plays.

It was actually kind of a surprise to find out that the fandom holds this movie in a bit of a negative light. In case you couldn’t tell from my sparse recap, a lot of aspects from earlier films play a part, from the utilization of flashbacks to the climax involving a song. But I don’t really think that this hinders the film in any way. It’s clearly meant to be an anniversary celebration, which is made abundantly clear when you realize that they included friggin’ background characters from the previous films. This is a multi-million dollar corporation, not the 1980s Italian film industry.

And it has its fair amount of high points. The characters are fully realized for the first time in a while, they take advantage of the new generation of Pokemon, and there are actual stakes for once.

That’s not to say that it’s a perfect movie. While it’s fun, it does have its flaws, particularly in regards to its visuals.

At the same time, I don’t entirely want to judge this film on its own. As previously stated, this movie forms a trilogy with its two immediate sequels, so that provides an opportunity for some of the loose plot threads to be picked up. But even taking that into consideration, I’d say that it’s worth a look as a one-off.